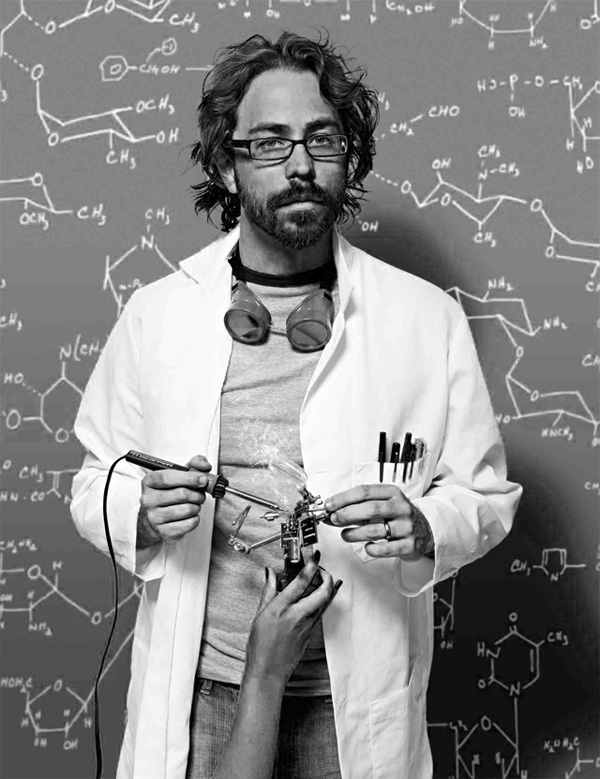 Marshall McLuhan was fond of observing that the content of a new medium is always an older medium. He would likely have taken a certain amount of satisfaction out of the notion that the job of popular music in 2008 is largely to serve as the content for cell phones and video game consoles. Legal downloads of digital songs from the iTunes Store alone outsell most traditional record stores. Downloads of ring tones for cellular phones regularly outsell the singles on which they’re based.

Yesterday’s major musical dinosaurs (we’re talking about you, Axl) pin their comeback hopes on the exclusive launch of new singles in video games like Rock Band and Guitar Hero. How will the hordes of bespectacled, androgynous Jesus-looking indie rock boys staring back at us from their MySpace pages cope in such a harsh, unforgiving market-driven digital realm? In the words of Jonathan Coulton, you just keep on trying till you run out of cake.

Last year, Coulton wrote “Still Alive,” sometimes called “The Portal Song,” the near-perfect end credit theme for Valve Corporation’s near-perfect video game Portal. The lyrics are only a fraction of the story, but here they are, as they appear in Portal‘s old-school ASCII credits:

This was a triumph.
I’m making a note here: HUGE SUCCESS.
It’s hard to overstate my satisfaction.
Aperture Science
We do what we must
because we can.
For the good of all of us.
Except the ones who are dead.
But there’s no sense crying over every mistake.
You just keep on trying till you run out of cake.
And the Science gets done.
And you make a neat gun.
For the people who are still alive.
I’m not even angry.
I’m being so sincere right now.
Even though you broke my heart.
And killed me.
And tore me to pieces.
And threw every piece into a fire.
As they burned it hurt because I was so happy for you!
Now these points of data make a beautiful line.
And we’re out of beta.
We’re releasing on time.
So I’m GLaD. I got burned.
Think of all the things we learned
for the people who are still alive.
Go ahead and leave me.
I think I prefer to stay inside.
Maybe you’ll find someone else to help you.
Maybe Black Mesa
THAT WAS A JOKE.
HAHA. FAT CHANCE.
Anyway, this cake is great.
It’s so delicious and moist.
Look at me still talking
when there’s Science to do.
When I look out there, it makes me GLaD I’m not you.
I’ve experiments to run.
There is research to be done.
On the people who are still alive.
And believe me I am still alive.
I’m doing Science and I’m still alive.
I feel FANTASTIC and I’m still alive.
While you’re dying I’ll be still alive.
And when you’re dead I will be still alive.
STILL ALIVE

For those who somehow missed the chance to experience Portal, despite its availability for PC, PS3 and XBox 360, this is how it works: you play a cyborg test subject attempting to navigate, and eventually escape from, a series of fiendish puzzle rooms housed in an abandoned scientific complex controlled by (what else?) an insane computer. Your only tool is the Portal Gun, a device which temporarily connects two surfaces via an extra-dimensional tunnel, allowing you to access locations in the complex that would otherwise be inaccessible. Throughout the game, the computer coaxes you onward with the promise of a party at the end of the tests, complete with moist, delicious cake. About the time that you discover the phrase “The cake is a lie” scrawled in blood in one of the darker corners of the complex, you begin to have some serious misgivings about your situation.[/box]

Portal is a sophisticated implementation of gameplay ideas that first appeared in a 2005 video game by Nuclear Monkey Software called Narbacular Drop. Created by students from the DigiPen Institute of Technology, it featured as its central character a princess without any knees who therefore couldn’t jump (I’m not making this up) and thus had to escape her imprisonment in a dungeon by dropping through a series of magical portals. As in Portal itself, gameplay in Narbacular Drop often requires the player to carry a crate along with them through the dungeon. Released as a free download, Narbacular Drop won a slew of industry awards and still has a loyal audience who develop and post custom maps for it. Significantly (if only for the purposes of ending this digression into the ubergeeky subfield of video game history), the success of Narbacular Drop also resulted in its entire development team being hired by Valve.

A former barista and software programmer, Coulton’s music has always skewed significantly toward nerd topics, as song titles like “The Mandelbrot Set,” “Todd the T1000” and “Flickr” make abundantly clear. At one point, Popular Science magazine even made him their Contributing Troubadour. In 2006, Coulton was tapped to write the Portal theme after playing a show in Seattle that had Kim Swift (one of the members of the original Narbacular Drop team) and several other Valve developers in the audience. After sitting down with Erik Wolpaw, who wrote Portal (as well as dialogue for Half-Life 2: Episode 2 and the amazing Psychonauts), Coulton came up with results so impressive that Wolpaw subsequently told a reporter from MTV’s Multiplayer blog that “We had a choice between [Coulton] and Ben Folds and we feel we made the right choice.” A bold assessment, considering Ben Folds made an album with Captain James T. Fucking Kirk himself.

Even separate from he remarkable circumstances of its production and circulation, though, “Still Alive” is a pretty solid pop song. Written from the perspective of the insane computer, then sung by Ellen McLean, the voice actor who plays the character in the game, Still Alive” is pushed into the Uncanny Valley (the nebulous interzone between people pretending to be machines and machines pretending to be people) by just the faintest hint of computer processing. The final version has a foreboding quality similar to the Cardigans’ cover version of “Sabbath Bloody Sabbath.” If I had to really pin it down, I’d say it’s a lot like listening to a battery-powered Cabbage Patch Doll singing a little nursery rhyme about how it’s going to kick the shit out of you.

Since its release, “Still Alive” has become the most famous piece of music to emerge from the world of gaming since the Super Mario Bros. theme. As of this writing, the version of the Portal end credit sequence on YouTube has had 2,065,375 viewings. The acoustic version of the song, performed by Coulton himself, boasts over half a million views. YouTube also hosts a slew of cover versions of “Still Alive,” including one sung in Japanese, one played on classical piano, one played on an 8080 computer, and another in Mario Paint Composer, which has received almost as many viewings as Coulton’s own version (remember what I said earlier about ringtones?).

Like any proper postmodern cultural narrative, this one inevitably ends up consuming its own entrails. On April 1, 2008, Harmonix, MTV Games and Valve released “Still Alive” as a free download for Rock Band. If you spend a little time browsing through the YouTube video covers of the song, you’ll eventually find footage of Coulton and his touring band doing “Still Alive” on their XBox as an encore. The bar separating guitar heroes from Guitar Heroes just got a little bit lower. I wonder if Axl will make it over the top?