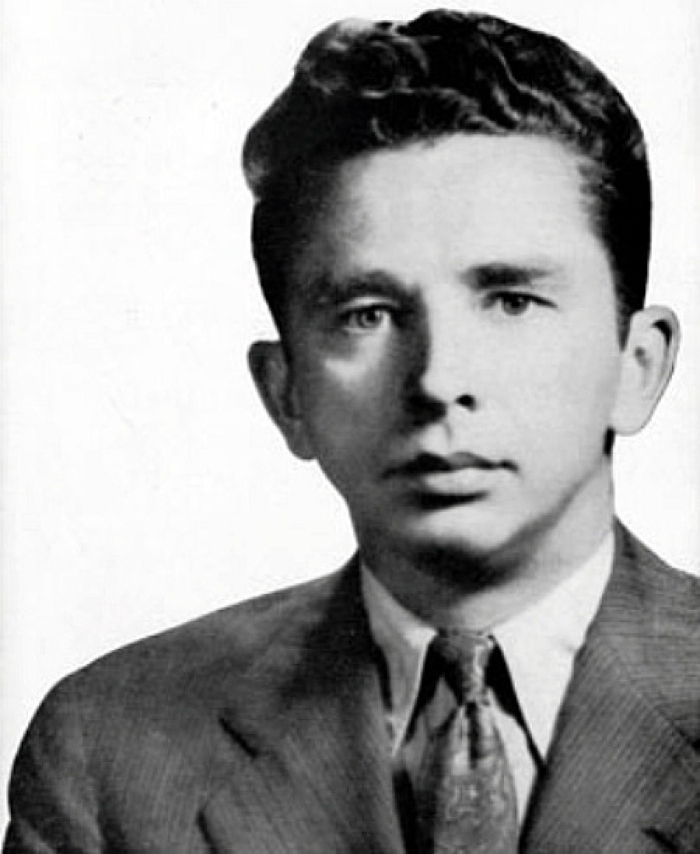 Sometimes the best writers of poetry aren’t poets at all. At such times, the job of the poet isn’t to write poems, but to find them.

The major practitioner of found poetry as poetry was Bern Porter. As Porter’s biographer James Schevill notes, the use of found material is a major component of 20th century art {{1}}, but few writers have devoted the bulk of their career to it, and no one developed the practice to the extent that Porter did. Formally trained as a physicist and engineer, Porter worked both on the development of the cathode ray television tube for the Acheson Colloids Corporation {{2}} and on the electromagnetic separation of uranium for the Manhattan Project in the Physics Department at Princeton {{3}}. On August 8, 1945, the day after the USA dropped an atomic bomb — the fruits of Porter’s labour — on the city of Hiroshima, Porter announced his resignation and never returned to work {{4}}. He subsequently spent much of the rest of his long life developing an expressly pacifist, intermedial, interdisciplinary fusion of scientific and artistic sensibilities that he referred to as “Sciart” {{5}}. The chief results of Sciart were the objects and texts that Porter referred to as “Founds”.

Over the course of Porter’s life, he published four volumes of Founds out of a projected series of seven: Found Poems (Something Else Press, 1972), which Porter wished to call Everybody’s Don’t Book (Dog Ear Press, 1984); and Sweet End (Dog Ear Press, 1989). Founds often include fragments of text, but “many are wordless, stemming from Porter’s insights into technology’s visual appeal” {{6}}. But founds were not just limited to words and images; they could also be objects {{7}}, sounds {{8}}, or even subject positions: “In the end,” writes Schevill, “Porter himself becomes a Found” {{9}}.

Like the objets trouvé of Dada, Surrealism and Merz, Porter’s Founds could be either physical objects or signs on paper. They were sometimes recontextualized without alteration, and sometimes modified in small but significant ways, such as cutting of portions of them away, or, conversely, combining them with other found elements to create a larger synthesis. Yet there are also some important differences between objets trouvé and Founds. Despite the apparent similarities of the objects themselves, they appear within significantly different discursive formations that are separated from each other by two factors: the horrific physical damage and considerable epistemological impact of atomic weaponry, and the rising importance of visuality as an effect of global mass media {{10}}.

Following World War II, Porter spent a considerable amount of time in Japan, especially in Hiroshima, attempting to come to grips with the consequences of his wartime employment. It was during this period that Porter began to make connections between his artistic production and a growing interest in civic planning. In the context of post-nuclear and the building blocks for the construction of a new one. Schevill cites Wastemaker: 1926-1961 (Abyss Publications, 1972) as the most important of Porter’s early collections of Founds. Porter’s comment that he chose the title “to imply not only the careless person who makes waste, but one who “remakes waste, who finds waste that is both significant and beautiful” demonstrates his own ambivalence about this process {{11}}.

To underline the shift in milieu that makes Founds different from objets trouvé, Schevill begins his discussion of Porter’s Founds not with Duchamp, Picasso and Schwitters, but with Tadeusz Kantor’s The Ruins of Odysseus. Kantor staged the play in a bombed-out building in Krakow during the Nazi occupation of Poland in the 1940s. The set decorations consisted entirely of “grotesque fragments of war” — found objects scavenged from the ruins of the city by the play’s cast. For Kantor, who at that point had no knowledge of Duchamp’s Readymades, “When the room was filled with objects, the text of the play lost its importance. What was important was constructing the environment, and the action of finding, choosing, and bringing those objects in” {{12}}. Making sense of Founds, then, will require not a hermeneutics of the object or text, but an analysis of the circumstances of their production, circulation, exchange, and the transfigurations that occur as they change contexts, with particular attention to the social space around them.

from objets trouvé: their imbrication in global media networks. Because of his prewar work on the development of the cathode ray tube and his postwar work at the University of California’s Engineering Materials Laboratory, Porter was acutely aware of the material conditions that brought about this shift in context. It should come as no surprise, then, that many of Porter’s founds expressly engage with mass media forms, especially photography, telephony and the post. For example, like Moholoy-Nagy and Man Ray before him, Porter produced a number of photograms (images created by placing objects directly on photographic paper and them exposing them to light — a kind of cameraless photography). Here again, Schevill argues for a contextual difference:

The process of “snapping a picture,” capturing a certain kind of external light, becomes a battle with an internal light that has burst out of confinement to exert primal force. If Man Ray’s and Moholy Nagy’s [sic] photograms achieved a distinctively decorative quality, Porter’s struggled to show — like Jackson Pollock’s explosive drip paintings that soon followed — the power of a new energy to distort, threaten, and thrill. {{13}}

Similarly, Porter’s The Manhattan Telephone Book 1972 “reveals the lonely anonymity and increasing defensiveness of a system that advertises open, friendly communication” {{14}}. It is in the ambivalence and tension that results from Finding an object and recontextualizing it that a productive critique emerge.

For the first decade of the 21st century, the most visible practitioners of found art have been Davy Rothbart and Jason Bitner, editors of (what else?) FOUND magazine, its accompanying trade publications and its website. The “One snowy winter night in Chicago a few years back, Davy went out to his car and found a note on his windshield — a note meant for someone else, a guy named Mario,” a noted they “loved” so much that they kept it to show to friends. When they began sharing their find, Rothbart and Bitner discovered that their friends had similar objects to show them in return. It was at that point that they “decided to start a magazine called FOUND, a showcase for all the strange, hilarious and heartbreaking things people’ve picked up.” After spending a year collecting materials, “then with scissors and tape we slapped together the first issue of FOUND in June of 2001.” The magazine was, at first, an annual production; the first of several trade books collecting items from the magazine appeared in 2004. “We certainly didn’t invent the idea of found stuff being cool” (Rothbart and Bitner), states the site, but beyond that vague admission, there’s no indication that the basic gesture of their enterprise has been an important technique of cultural production for the last century.

Substituting for the lack of history — or any vestige of critique — in this narrative is a sort of sentimental nostalgia that Fredric Jameson characterizes as one of the hallmarks of the cultural logic of late capitalism in Postmodernism. Nostalgia, argues Jameson, is not about “representing” historical content (including “our own present and immediate past”), but about conveying a sense of “pastness” through the stylistic connotation of physical qualities {{15}}. The love for all the strange, hilarious and heartbreaking things that FOUND has found, then, is a perfect match for their digital layouts of torn scraps of keys secured with adhesive tape that fill its web pages and trade paperback books.

This last point is important because, though FOUND mimicks the production style of the pre-desktop-publishing zines of the 1980s, it is another sort of entity entirely. From its second issue onward, FOUND already imagined itself as a commodity, complete with barcode, seven pages of carefully ironized classified ads, including a FOUND t-shirt and a CD that presage the rang of customizable goodies on the website’s “Merch” page, and, tellingly, a subscription form that is the only pristine, digitally typeset page in the issue. When it comes to selling itself, FOUND has always been all about clarity. The cover of FOUND: The Best Lost, Tossed, and Forgotten Items from Around the World, the first paperback collection of the magazine (published in 2004), removes all doubt, announcing itself as “The National Bestseller.”

As Jameson contends, the commodity is the “other face” of postmodern nostalgia, and it exerts a powerful bidirectional influence. As simulacra like FOUND emerge, nostalgia reaches back and transforms early editions of the works of the Dadaists, Surrealists, Porter and even the first few issues of FOUND from historical documents into coveted collectors’ editions that fetch magnitudes more than their original cover prices on eBay and ABEBooks. As “a bit of yuppie furnishing,” they are every bit as contemporary as their networked digital duplicates. The latter also continue to transform, foregrounding themselves “as language and as communication (rather than as artistic production in any older sense)”, connecting “the omnipresence of the media as such” to the entire assemblage {{16}}. It should come as no surprise, then, that editor Davy Rothbart has parlayed his reputation from FOUND into a career not as an artist, but as a radio and print journalist, regularly contributing to public radio’s This American Life (again, selections of which can be purchased as a double CD from the magazine’s website) and a range of leading periodicals, including The Believer, High Times, The New Yorker and The New York Times, among others.

… but the chain of dialectical transformations doesn’t stop there. Borrowing from the vocabulary of communication and cultural theorist Raymond Williams, Jameson notes that the historical elements caught up in and transformed by a postmodern digital frame can “slowly take on the positive and active values of conscious resistance, as choices and symbolic acts that now repudiate the dominant poster-and-decorative culture and thereby assert themselves as something emergent rather than something residual” {{17}}. Out of the digital textual echoes of a revolutionary analog avant-garde past, it may be possible to imagine a utopian future. Jameson is quick to point out that there are no guarantees that any such utopia will ever materialize out of the incessant formation and destruction of assemblages of various signs, discourses, subjects and objects caught in the cultural ferment, but a provocative question arises. What happens when we start discussing possibilities instead of the already accomplished? What happens if we start to consider the problem from the point of view of potential? What, in other words, if we think about the Findable instead of the Found?

(to be continued elsewhere …)