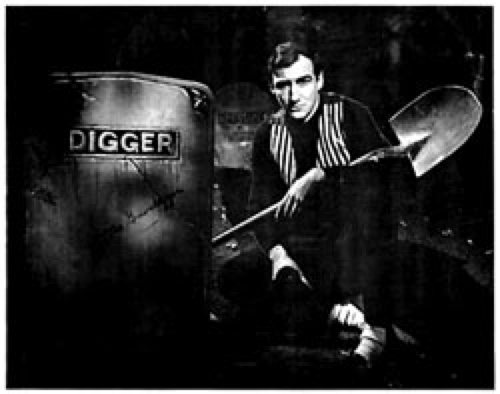 “Get your dancing partner and take her over to Four Apostles.”

Those are the first words that I hear most mornings from Arnold the foreman during the summer of 1988. I’m working as a gravedigger at the Chapel Lawn Memorial Gardens Cemetery Crematorium & Funeral Home, just outside Winnipeg. Four Apostles is one of half-a-dozen football field-sized burial gardens, almost all with bland, inoffensive Biblical names: Good Samaritan, Last Supper, Resurrection. (Almost all. Right inside the gates, always, inexplicably, there’s Babyland.)

My dancing partner, a.k.a. The Pounder, is a five-foot tall cast-iron cylinder that weighs more than I do. On one end are two wooden handles, a trigger, a gas tank and a spark plug. The other end — the business end — is a piston tipped with a rubber foot the size and shape of a barstool. Thumb the trigger and the whole mess jumps a foot straight up then comes right the fuck back down, hard. God help you if you take it on the chin or land it on your boot.

We spend the day dancing on graves.

The Pounder packs everything down tight: grass, dirt, coffins, bones. Wayne follows with a wheelbarrow full of topsoil. In a few weeks we’ll resod and water and roll. Occasionally The Pounder will punch into a hollow spot or a gopher hole and I’ll have to get Wayne to help me pull it back to the surface. This never fails to creep me out. By 11 The Pounder is hotter than an elephant’s ass and I’ve already got some bad burns on my forearms.

Mourners hate The Pounder but discretion is impossible. This is southern Manitoba. We’re the only vertical things for thousands of yards.

When I’m not dancing with The Pounder, I’m usually attached to some other small, hot, noisy, diesel-belching, dangerous machine for a full eight hours: lawnmowers, wire-tipped weed whippers, hedge trimmers. There is nothing bucolic about gardening on this scale.

Every now and then there is a real change of pace. We spend three weeks digging trenches for a sprinkler system, eight inches across, two-and-a-half feet down, so the pipes will sit below the frost line. Every morning before I go to work I soak my hands in hot water to get them to unclench. Once I spend three days in the morgue making cardboard coffins and mopping out the crematorium. The furnace itself is a big blue box that looks like a pizza oven. It empties through a little drawer on the side. Sometimes when I punch in, there’s a small cardboard cube sitting on the stack of time cards. If you shake it it sounds like it’s full of gravel.

I get two 15-minute coffee breaks and an hour for lunch. Conversation during breaks covers four topics: what we drank last night; what we’ll drink tonight; the Sun Girl; country music — puzzling, because most of the guys that work at the yard are into hardcore punk. But true nonetheless. A typical exchange between Wayne and Ernie, an older guy from the Qu’Appelle Valley to whom Wayne is vaguely related, goes like this:

That’s five minutes of my life that I’ll never get back.

Do I actually dig graves? The backhoe does that. Except in Babyland, where Steve and I use a small, hot, noisy, diesel-belching, dangerous posthole auger to make scaled-down versions of the normal graves. This happens more often than I care to think about.We square the graves off with shovels then hide the dirt under sheets of astroturf.

Do I like it? Fuck no. But it’s the best-paying job I can get that summer with a BA (First-Class Honours) in English. Being a writer might not pay better, but at least computers don’t burn diesel.