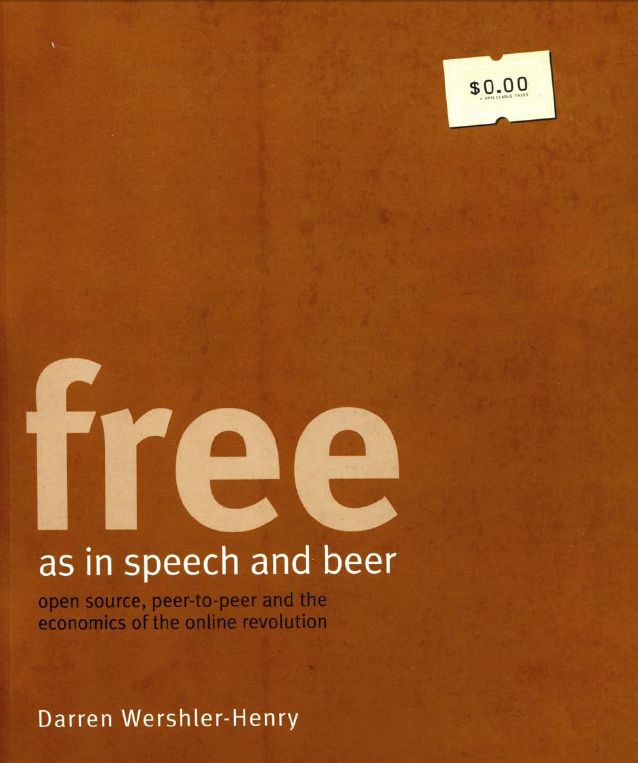 At the end of the 20th century, I was writing and publishing a lot of books about the Internet. (Everybody has to pay the rent somehow.) Some parts of these books still hold up reasonably well; others are misguided and flat-out wrong in ways that make me wince openly. But that’s the way it is with things you wrote nearly a dozen years ago. The rights to both books reverted to Mark and me several years ago, so they are now available as PDFs.

CommonSpace, an Internet theory book I co-authored with Mark Surman, is interesting because we were searching for a term for what we now call social media — various technologies that allowed people to write back to the Web, which was, for the most part, static in those days. At some point I’m going to write a “CommonSpace Revisited” essay and flag the useful bits and the parts about which I’m more ambivalent, but what strikes me when I reread it is how much fun we had when we were writing it. Parts of it are still pretty funny, but there’s a lot here that’s of historical interest too. It may be hard to imagine now, but there was a time when it was possible for the official slug line of Blogger to read “Amphetamines for Your Website.”

FREE as in speech and beer, which came out a couple of years later, holds up a little better. It’s mostly an intellectual history of the notion of freedom as it pertains to sharing on the Internet. The book outlines the difference between “free as in rights and liberties” of Richard Stallman and company, and the “free as in getting something for nothing” that still drives file-sharing today, and contextualizes them in terms of the theory of potlatch and the general economy. Again, it was a lot of fun to write, and it may be of use to those too young to remember that Napster really wasn’t invented by Justin Timberlake. In retrospect, though, the tone bothers me, and I avoided the probable conclusion in favour of a kind of techno-optimism, which, given the way social media has developed, I deeply regret. So  there’s revision to do here as well. 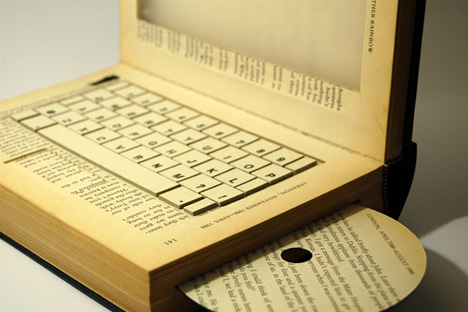 The report reflects the growing concern in the scholarly and cultural communities, and beyond, regarding the sustainability of Canada’s digital knowledge and heritage. Canada’s digital advantage is only of value if it can be carried into the future. Canadians must meet the challenge of preserving and enhancing scholarly and artistic knowledge production and our culture in a digital environment. Therefore, the report reviews the current state of knowledge about the sustainability of digital scholarship and related cultural activity in Canada and identifies research opportunities that emerge from consideration of the literature.

Both an executive summary and the full report (as a PDF) are available for perusal.

(Image by Kyle Bean: “The Future of Books.”) 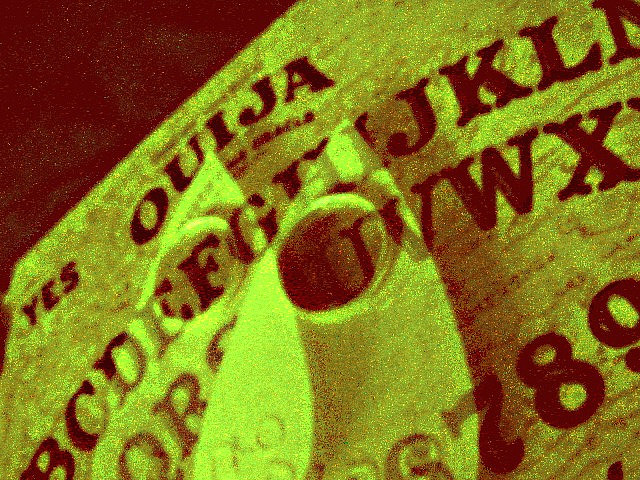 Status update: ‘Emily Brontë and her Playstation are overly friendly these days’

Facebook’s status update bar may be its most popular, enduring and influential feature (given the rise of Twitter’s real time fixes for the focus-challenged). For writers Darren Wershler and Bill Kennedy, status updates are also poetry. Or, rather, it becomes poetry after the RRS feeds of thousands of Facebook users have been harvested, shorn of the user names and attached to the names of dead poets or writers.

Wershler and Kennedy’s site statusupdate.ca performs that task with each visit, thereby creating an alternate universe where the famous and the obscure are alive, well and reveling in the banal. Thus, Samuel Johnson’s “socks keep falling down. Day after day, sock after sock. WHY?!?!” and “Ted Hughes is not a number! I am a free man!” Should you become fascinated by the fact that Kingsley Amis is “watching Serenity for the second time,” each dead writer’s name has its own RSS feed.

Some of you may note that Wershler and Kennedy are the same digital hooligans behind the poetry-generating website and book Apostrophe. statusupdate.ca does the idea of generated poetry one better by working on several levels simultaneously. First, and most important, it’s flat out funny and endlessly readable. Yet dig deeper and Wershler and Kennedy’s cheeky appropriation of Facebook’s purposefully “neutral” look also reminds us that Facebook is wholesale appropriating your information for all manner of data-harvesting, 140 characters at a time. By attaching the name of a writer to effectively anonymous lines, Statusupdate.ca lessens the bite of social networking economics.

If I can paraphrase an old radical slogan, “Users! One more step to be creators.”

Reposted with permission of Brian J. Davis. Featured image by ~!. 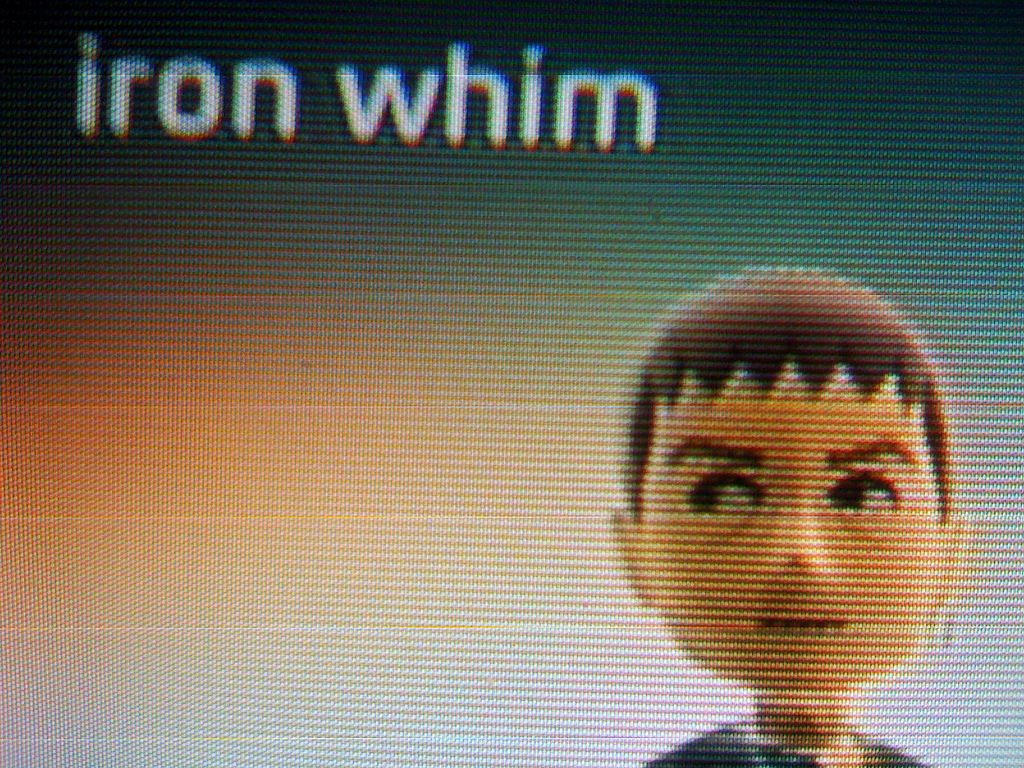 On November 19, 2008, Microsoft relaunched the XBox Live Network with a brand-new (bearing in mind that with Microsoft, new is always a relative state of mind) avatar-based interface, and the XBox-based portion of my online identity received an extreme makeover.

“Your avatar,” writes Microsoft, “is your game face throughout the New Xbox Experience and represents your personality, whether you are serving as an Xbox LIVE Party host, playing a game of Scene It?® Box Office Smash, or chatting with a friend.” Never mind that I liked the Blades interface better; it’s gone like a Spice Girls lunchbox is gone. So let’s come to grips with the notion that an ostensibly adorable, vaguely asexual and notably creepy digital puppet now “represents my personality.”

As the pictures above (snapped off my TV) demonstrate, the best that the XBox avatar construction kit can do is to make me look like a virtual Pinocchio. Like the original, pre-Disney wooden boy, who was, by all accounts, kind of an asshole, this Mini-Me is not particularly pleasant. In fact, I’d go so far as to say that this little avatar is a full-fledged citizen of the uncanny valley.

First postulated by Masahiro Mori in 1970, the Uncanny Valley is an hypothesis about what happens to human emotional response as robots become increasingly lifelike in appearance. For Mori, our positive emotional response to anthropormorphism peaks just before resemblance to the human becomes accurate — with stuffed animals and Wall-E, for example. After that point, though, as resemblance becomes stronger, there’s a noticeable change in perception. Revulsion sets in as machines become too lifelike. If you graph this relationship, the fall-off in positive emotional response to increasingly lifelike machines forms a trough, i.e. the aforementioned Uncanny Valley. As Slavoj Žižek has noted, too much life is a bad thing — the Uncanny Valley is populated with zombies, vampires, Terminators and other nightmares that have no business being alive. The little monster capering around my XBox interface is no exception.

Evidently, though, Microsoft is successfully backfilling the more worrisome trenches of the Uncanny Valley and tamping it all down nice and smooth. Gamasutra reported in early December that since the launch of the New XBox Live Experience, sales have tripled. In paricular, the game A Kingdom for Keflings, one of the first games that gives you the choice of playing as your avatar, registered the second-best debut performance ever on the service.

Other than the blatant attempt to pooch Nintendo’s look and feel in the interest of interpellating you directly into the XBox brand instead of relying on external (possibly unlicensed!) products to establish your sense of subjectivity, I can see little rationale for the new XBox avatars. Mimetic realism in video games has no relationship to fun; in most cases, it usually inhibits playability. The recent reemergence of classic arcade games like Tempest, Missile Command and Galaga, usually in both “classic” and “rebooted” form, plus the astonishing success of the Geometry Wars (“Retro Evolved”) franchise, feels like a lesson that’s been entirely lost.

Mimesis in video games seems to culminate with two highly rendered figures hammering away at each other in a close-quarters, button-mashing frenzy (viz. Soul Calibur IV or any other descendants of Street Fighter). In other words, when the emphasis falls on rendering rather than gameplay, the experience of a virtual world narrows down to a bloody ring drawn on the floor of an arena. Or, alternatively, it might be an alien hooch-club stage populated entirely by dancing penis monsters, which is amusing in the short term, but ultimately just as tedious.

I’m not advocating a return to Pong, mind you. You’ll have to pry my copy of The Orange Box out of my cold, dead fingers. But I would like to leave a little something about the way I present myself to the imagination. Why can’t I be a robot, a bug, a fish, a superintelligent shade of the colour blue? The easiest way to do that is with a humble, two-dimensional portrait in the corner of the screen.