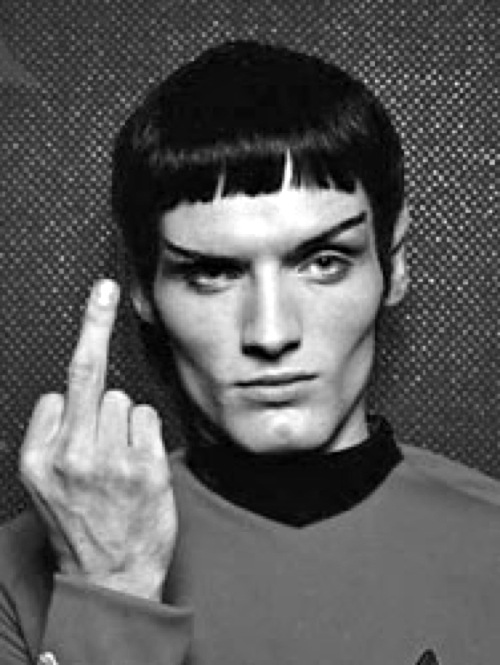 Star Trek was born in the same year that I was. Some time in the past thirty-nine years, I believe, it replaced Christianity as the major religion of North America.

My theories about the intricacies of this transformation are fairly convoluted, but to keep this article rolling along, I have thoughtfully prepared a concise little chart:

Here’s the thing about religion: it demands active participation from its adherents. After the ST: E debacle, 2006 is the first season in a quarter century that Paramount has not produced a new series for the faithful. In other words, an ideal time for a heretical new sect to emerge, led by zealots and prophets and sun-staring visionaries, ranting and foaming and speaking in tongues. Or, failing that, nerds.

Jack Marshall, who is also as old as Star Trek and me, is a keeper of the True Faith. By one quasi-credible account, he may be the force that produced the infamous fan-based Reformation of the other major SF religion: Star Wars: The Phantom Edit (for those who have already moved out of their parents’ basements, SW: TPE is a Jar-Jar free version of George Lucas’s loathsome Episode I: The Phantom Menace). In any event, Marshall is indisputably the original director of Star Trek: The New Voyages — now retitled “Star Trek Phase II” (Ed. Note) — , an online, fan-produced, acted, edited and filmed continuation of the series that started it all.

Remember how, in the introduction to Star Trek: The Original Series, Kirk informs anyone within earshot that the Enterprise was on a five-year mission? Paramount made a liar out of Kirk three years in by cancelling the show. Star Trek: The New Voyages is all about filling in those missing two years, albeit with a younger, less paunchy and wrinkly cast. Their website offers the following by way of explanation for the outraged:

[We] feel that Kirk, Spock, McCoy and the rest should be treated as “classic” characters like Willy Loman from Death of a Salesman, Gandalf from Lord of the Rings or even Hamlet, Othello or Romeo. Many actors have and can play the roles, each offering a different interpretation of said character. Though the character is the same, the interpretation of the actor is what’s in question. We feel that the crew of the Enterprise has more to teach us about life and each other than has been explored to date. We also feel the new actors can add to the legend in a believable and contemporary way. Yes, some may have a problem separating Shatner from Kirk — all we ask is that you give it a try and see whether Kirk and the crew still have something to say to you.

So who plays Kirk? James Cawley, the other major participant in the New Voyages project, and a professional Elvis impersonator by trade (you can’t make copy like this up … the real world is far too strange by comparison). Dude spent over a hundred thousand dollars constructing an exact replica of the bridge set from the original show in his granddaddy’s barn. For that kind of devotion, I say he should get to play Uhura if he wants, as long as he waxes his legs.

The rest of the Star Trek holy trinity is rounded out by a video store clerk named Jeff Quinn (Spock) and a urologist named John Kelly (McCoy) who has — I shit you not — a Batpole in his house behind a sliding bookcase. Evidently urologists make good money and have plenty of spare time.

No one you’re likely to see in a New Voyages episode is going to appear on the Actor’s Studio any time soon. Nevertheless, they garner enough respect for their project that members of the original cast have deigned to appear in their productions. The pilot and first New Voyage episode feature assorted spear-carriers from the old days recognizable only to the Comic Book Store Guy types that walk among us, but “To Serve All My Days”, their second official episode, now in post-production and slated for release on September 8th, 2006, will star none other than Walter Koenig, the original Chekov. The third episode, “World Enough and Time”, scheduled to be released some time in late 2007, will star George Takei, reprising his role as the original Mr. Sulu.

Even the original special effects people are starting to offer their services (so far, New Voyages is a not-for-profit gig, which is the reason the Roddenberry estate tolerates it). Ronald B. Moore, the visual effects supervisor who has oversaw SFX on Star Trek: The Next Generation, Star Trek: Deep Space 9, Star Trek: Voyager, Star Trek: Enterprise and the Star Trek: Generations movie, is one of the latest of the old school to throw his hat into the new ring.

Cawley’s reaction to Moore’s association with New Voyages spells out the sort of dreams that represent the in ultimate wish fulfillment for the thousands of people cranking out fanfilm all over the globe: “You know if someone had told me three years ago that I’d be working with all these incredible talents that brought Star Trek to us on TV and the big screen I would have never believed it.” Anyone can sit down and write a story set in the Star Trek universe. It takes a little more determination (obsession) to make a fanfilm, but when the fanfilms begin to elicit the involvement from the principals in the original, then the simulation is no longer a simulation: it has become the thing itself.

What are we to make of all this? Christian Bök maintains that all of fanfic and fanfilm falls somewhere in between wanking off in front of your TV set (he had K/S fanfic in mind at the time, I believe, but I think the point still holds) and stalking celebrities. Me, I try to emulate something Elvis Costello once wrote: I used to be disgusted, and now I try to be amused. At this point in my life, suspension of disbelief is mandatory. I’m reasonably certain that one day before too long I’ll be watching some child playing Baby Kirk at the school Christmas pageant.