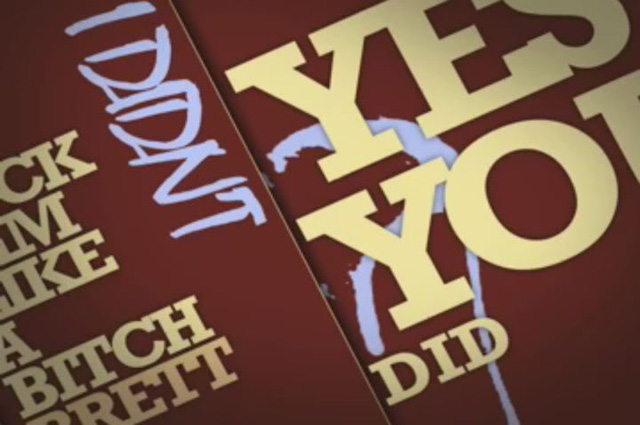 Gertrude Stein once observed that the first time someone makes something, it’s ugly and no one likes it. The second time someone makes the same thing, it’s pretty and everyone can like it. I’ve often taken Stein’s aphorism as a commentary about how the forms of the 20th-century avant-gardes, which were once so far outside of the mainstream of culture, have become smoothly functioning components of the vast digital machines that we use to sell things to each other.

In 2007, Jarratt Moody, then a student at the Savannah College of Art & Design, made “Say What Again” for a class on time based-typography taught by Professor Duff Yong. For a long time, it circulated around various video sites under the title “intonation.mov,” which I actually like better than “Say What Again,” because it sums up the nature of the entire clip without referring explicitly to its content.

Whatever you call it, this clip is the epitome of the phenomena that Lev Manovich describes in his essay “Avant-Garde As Software” namely, that software “codifies and naturalizes” the techniques of early twentieth-century innovators in Italian and Russian Futurism, Merz, Dada and the other avant-gardes.

“Say What Again'”s evocation of mayhem through letters in motion positions it as a direct descendant of Filippo Tomasso Marinetti‘s “parole in liberta” (words in freedom). What Marinetti was after was a form of literature that accurately conveyed the enthusiasm of the day for emerging forms of electrical and mechanical technology. In his 1912, “Technical Manifesto of Futurist Literature,” Marinetti writes: “One must destroy syntax and scatter one’s nouns at random” and “one should deliberately confound the object with the image that it evokes” accomplishing this goal by varying tones to avoid a “tedious unity” – using symbols instead of letters, employing a multitude of typefaces and sizes, non-rectilinear layout and so on.

In “Geometric and Mechanical Splendor and the numerical Sensibility,” he writes that, “The words-in-freedom, in this continuous effort to express with the greatest force and profundity, naturally transform themselves into self-illustrations, by means of free, expressive orthography and typography.” Nearly a hundred years before “Say What Again,” the sensibility that could have produced it was already in place.

The avant-gardes, of course, made films of their own, some of them typographic. Marcel Duchamp‘s “Anemic Cinema,” wildly innovative in a time of wild innovation, is an analog ancestor of dynamic typography. Given the technological limits of the day, most of the films of the avant-garde were quite short, so there’s a certain formal similarity between them and many of the clips on the Internet, which tend to be brief in order to minimize the limitations of streaming media. But the similarities go beyond duration to describe a particular kind of cultural moment.

Like the typography of Italian Futurism, “Say What Again” emphasizes the dynamism and violence of the culture that produced it through the placement and size of typographic elements. What’s more, the choice of particular typefaces also conveys meaning because of the previous uses of that face as well as its general shape and outline. Linotype Mistral, now inseparable from its appearance on the cover of NWA’s definitive gangster rap album Straight Outta Compton, connotes violence even without animation and accompanying blood spatter.

The slab serif face that the bulk of the video is set in is some version of Rudolph Wolf’s Memphis Bold or Extrabold. Created in 1930, “Memphis” refers to the city in Egypt, not the one in Tennessee – not because Egyptian writing systems look anything like these characters. When these characters were first developed for use in advertising at the beginning of the 19th century, Napoleon had just invaded Egypt, and a vogue for all things Egyptian spread across Europe. Calling a new typeface “Egyptian” at such a moment was, above all, good marketing.

In any event, a canny typographer named Robert Fanning, whose Fann Street Foundry specialized in the development of display faces, dubbed the big blocky letters “Egyptian” (they had previously been marked at “Antique” by Robert Figgins in 1815). What does all this have to do with Marsellus Wallace? Well, like the soundtrack says, both are big and both are black — in typography, “black” indicates a weight of type that has heavier and thicker strokes than a bold face. Those who wish to can ruminate on the pharaonic power Wallace wields throughout the film as well.

The SCAD typography students’ work, and this clip in particular, have spawned something of a dynamic typography craze. Look at Moody’s online portfolio or Google “dynamic typography” and you’ll start seeing some very successful commercial work almost immediately. There’s nothing inherently “revolutionary” about any form; as the dynamic typography of Italian Futurism was once absorbed into Fascism, it’s now become part of late capital’s visual vocabulary. The Ford “Crazy Smart” commercial for the F-150, with voiceover by Denis Leary, brings things full circle, returning dynamic typography to Futurism’s obsession with the automobile as the nexus of mechanical speed and power:

What’s fascinating to me is that the production, circulation and consumption of this clip and others like it takes place without any real reference to the century of typographic innovation that preceded it. I suppose that this is how the “new” is always created – by locating buried nuggets of potentiality that were betrayed by the actual events of the past, then polishing them up for all to see.